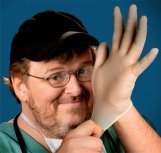 I just saw Michael Moore’s movie “Sicko“. I’m aware of all the criticisms that have been leveled at Moore. I will admit some of Moore’s heavy-handed methods in Sicko did irk me. But putting that aside, Sicko still makes a valid and important point. The American Dream has gone off its rails and the broken health care system is just one “symptom” of that. Sicko takes a look at other countries and cites statistics showing that people in other countries enjoy lower infant mortality rates and longer, healthier lives than Americans.

Being an employment attorney, I was especially surprised to watch Sicko’s account of how poorly US medical leave policies compared with those of other countries. Then I did some further research.

According to a 2007 report from The Project on Global Working Families – The Work, Family, and Equity Index: How Does the United States Measure Up? – which surveyed worker policies in 177 countries, the US performs well in terms of anti-discrimination policies, while US overtime policies are near the top of the range (only 6 countries mandate more than “time and a half”).

Where the US lags behind, though, is in sick, medical and paternity/maternity leaves and work hours. Here are some excerpts:

– “U.S. guarantees no paid leave for mothers in any segment of the work force, leaving it in the company of only 3 other nations: Liberia, Papua New Guinea, and Swaziland.” [Note: California has the Pregnancy Disability Leave Law]

– “At least 126 countries require employers to provide a mandatory day of rest each week. The U.S. does not guarantee workers this 24-hour break.”

– “More than 81 countries provide sickness benefits for at least 26 weeks or until recovery. The U.S. provides only unpaid leave for serious illnesses through the FMLA, which does not cover all workers.”

– “49 countries guarantee leave for major family events such as marriage or funerals; in 40 of these countries, leave for one or both of these family events is paid.” Not the U.S. And not California. Just a few months ago, SB 549, a bill that would’ve given employees 4 days of bereavement leave, passed the California legislature. Governor Schwarzenegger vetoed it. Imagine getting fired for attending your mother’s funeral. You can stop imagining, that’s the reality.

Under the US Family Medical Leave Act (and also under the analogous California Family Rights Act), employees are entitled to take a maximum of only 12 weeks of job-protected medical leave to care for a newborn, newly adopted child, seriously ill family member or for the worker’s own serious illness. The FMLA does not protect all workers, only those who have worked at least one year for their employer, have worked at least 1,250 hours in the past year, and whose employer has at least 50 employees working within 75 miles of the employee’s worksite. According to the AFL-CIO, this means FMLA leaves 40% of workers out in the cold. 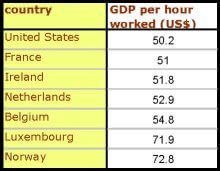 You might think that being “hard-core” means Americans are more productive than everyone else. Wrong. According to the OECD, US productivity is lower than countries with more generous medical leave policies like Ireland, Netherlands, Belgium, Luxembourg, Norway and, surprise, France, a country that Sicko focused heavily on. In fact, according to this article in the Washington Post, 75% of women in France with at least two children are employed. The number in the US is far lower than that.

So working reasonable hours, being able to take time off to take care of illnesses, and having periodic breaks from work translate into greater productivity (and a happier worker)? You don’t say. Looks like it’s time for Governor Schwarzenegger to rent his own copy of Sicko.